Jason Anderson puts Husqvarna in the winner’s circle in the premier class for the first time in history at the Anaheim Supercross.

Two years ago, at the 2014 Monster Energy AMA Supercross Series-opening Anaheim Supercross, Jason Anderson passed Cole Seely in the last corner on the last lap to steal the win in the 250cc West main event, and Anderson went on to win the series title.

It was just that kind of night at Anaheim. Again. After all, where else but the season opener would a pack containing four AMA regional supercross champions—two of them who also happen to be two-time Monster Energy AMA Supercross champions—be battling on-track for fifth place? Where else would factory Yamaha star Weston Peick be disqualified for trying to punch out Vince Friese in their semi? And where else would former series champion James Stewart get KO’d in a berm the 450cc main event was three laps old?

But forget the weird and intangible vibe that seems to permeate the series opener on a perennial basis. Anderson’s win is perhaps less about the typical first-race Anaheim voodoo and more a testament to the dedication that both he and Husqvarna have put into improving themselves during the off-season.

For Anderson, that includes shadowing current Monster Energy AMA Supercross Series Champion Ryan Dungey, who finished second tonight after crashing early in the main event, under the watchful eye of trainer Aldon Baker. Anderson’s fitness certainly showed as he battled his way through a stacked field during a shortened, 20-lap 450cc main event that had to be red-flagged when former series champion James Stewart was knocked out after he collided with reigning champion Ryan Dungey of the Red Bull KTM team. After the restart, Anderson never backed off, and he caught Seely with about seven laps to go to set up the pass for the win. As fresh as Anderson looked after storming to a 4.2-second margin of victory at the finish, it may not be his last of win of the season.

“I honestly just felt good out there,” Anderson said. “It was high intensity, I was coming through the pack, but to pull off a victory and put a Husqvarna on top? As a kid, you work to be at the top of this sport, and to be winning a 450 main event is so unreal. I’m just stoked right now, and I think to have a red plate on this white bike next week will look sweet.”

Autotrader/JGR Yamaha’s Justin Barcia jumped out to the early lead with Yoshimura Suzuki’s Stewart second and Anderson third as the field appeared to spread out quickly on the opening lap. Anderson wasted no time in jumping past Stewart to take over second place. Then, just as quickly, the top three riders bunched up and the battle for the lead heated up. However, the jockeying of the front three allowed Dungey to quickly reel them in, the reigning series champion latching onto Stewart over the finish line jump to start lap two. Barcia then bobbled and nearly collected Anderson. While Barcia recovered quickly enough to maintain the lead, Stewart was able to get back around Anderson for second place. Meanwhile, Monster Energy/360fly/Chaparral/Yamaha Factory Racing’s Chad Reed began to assert himself, moving up to fifth place with fast heat race winner Trey Canard on the Team Honda HRC CRF450R overcoming a poor start to run sixth.

The race then dramatically changed on lap two when Anderson dove under Stewart to retake second place in a rhythm section. Stewart ran wide in an attempt to square it up underneath Anderson in the same corner and inadvertently cut right into the path of Dungey, who was still at full steam and headed toward the berm. Dungey t-boned Stewart, sending him to the turf. Stewart’s helmet appeared to strike the ground hard during the crash, and he lay motionless on the racetrack, forcing AMA officials to red flag the race so that the Asterisk medical crew could attend to Stewart without having to concern themselves with race traffic. Stewart was eventually able to make his way to the Asterisk transporter under his own power, but he appeared to be concussed as a result of the crash.

Pursuant to AMA rules, the race was completely restarted, and this time neither Barcia nor Anderson got as good of a start. Instead, Team Honda HRC’s Seely grabbed the holeshot and led a string of fast riders, including Barcia, Tomac, Dungey, Canard, BTO Sports KTM’s Justin Brayton and Reed. Anderson appeared to be flying once again as he soon worked his way past Reed and moved into sixth place while Brayton fell back to eighth. That order pretty much remained unchanged until Canard got underneath Dungey. The two riders made contact, and Dungey crashed, losing three positions before he was able to get going again.

Canard must’ve decided that it was time to begin making moves, because he next went after Tomac, tripling past the Kawasaki rider on lap six to take over third place. Anderson also found his way past Tomac to take up fourth place on the same lap. Canard then passed Barcia to give Team Honda HRC the top two spots before the race was halfway complete.

But Anderson was still moving through the field. He tripled past Barcia in the same spot on the track where Canard passed Tomac to move into third place, and on lap nine he drag-raced Canard up the start straight to take away the second spot. Anderson then began to seriously cut into Seely’s lead, chopping it from 5 seconds to just under 2 seconds in two laps. Soon enough, Anderson could see Seely just ahead of him. In the meantime, Dungey managed to roll underneath Tomac in the first turn to take over third place.

Anderson moved past Seely rather easily on lap 13, and he flat rode away from the field. Seely held on to second place for as long as he could, but in the end, Dungey came up to steal the spot. Tomac held on for fourth place and Roczen, who got off to a horrible start in the main, managed to work his way up to fifth place.

In the 250cc West main event, reigning series champion Cooper Webb got off to the start that he was hoping for this season by guiding his Yamalube/Star Racing/Yamaha entry to the main event win. Webb was pinched off from his position on the inside half of the starting gate in the 15-lap feature race, but he managed to avoid any tangles as he worked his way up to fourth place through the first corner while Troy Lee Designs/Lucas Oil/Red Bull KTM’s Jessy Nelson took the lead ahead of GEICO Honda riders Jordan Smith and Jimmy DeCotis. Webb’s teammate Alex Martin and Rockstar Energy Husqvarna’s Zack Osborne, Monster Energy/Pro Circuit/Kawasaki’s Joey Savatgy and GEICO Honda’s Christian Craig were all inside the top 10.

Osborne and Savatgy began to move forward, passing Alex Martin on the second lap while Webb got around Smith for second place. The fourth-place through sixth-place riders then began to bunch up, and Craig tangled with Savatgy on lap four with both riders hitting the deck and falling outside the top 10.

Up front, Nelson continued to lead the race, maintaining a lead of about 4 seconds over Webb just before the halfway point. However, Webb began to make up time in the second half of the race, knocking about .3 of a second at the end of lap seven. He knocked another half a second off Nelson’s lead on lap eight. Webb kept attacking, and he methodically reeled-in Nelson, and he was right on the Nelson’s rear fender with five laps to go.

Nelson then made a costly mistake when he lost he bobbled in one of the rhythm sections, allowing Webb to get a good run on him and challenge for the lead. Webb was able to cut to the inside of Nelson in a right-hander to take the lead, and after that he set sail toward the finish, carving out a margin of victory in the remaining four laps. 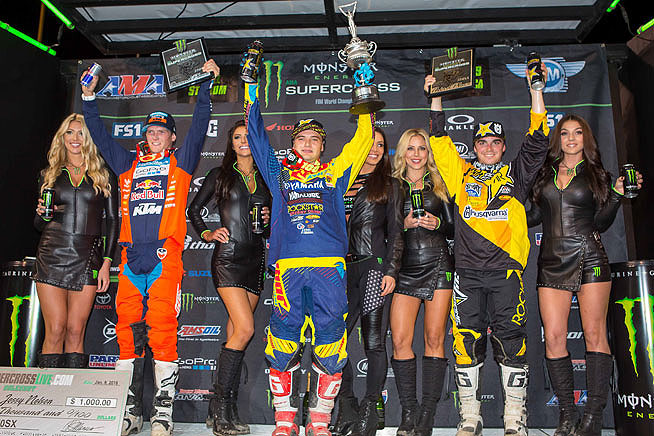