RCH Soaring Eagle Jimmy John’s Suzuki’s Ken Roczen came into round five of the Monster Energy AMA Supercross Series at University of Phoenix Stadium confident that if he could get a good start he had would it would take to win.

When the dust settled on the 20-lap main event, Roczen proved that confidence was not misplaced.

The German rider rounded the first turn in third place but only needed three turns to take over the lead. From there, he ran 20 flawless laps to earn his fifth career 450 supercross win and his first of 2016, putting a stop to rival Ryan Dungey’s supercross win streak.

“It’s such a good feeling, you know,” Roczen said. “The track was really tough out there, but I mean we have been working so hard to get everything dialed. It is really hard, once you have a struggle, to fix that and go again. That’s what we did.”

Of course, it helped Roczen’s cause that Dungey got off to a terrible start in the 22-rider feature, but the reigning Monster Energy AMA Supercross Champion showed just what he is made of by screaming through the pack to finish second, ahead of Monster Energy Kawasaki’s Eli Tomac on a wild night of racing that showcased a number of furious battles for track position through the early laps.

BTO Sport’s KTM’s Davi Millsaps and Smartop MotoConcepts Honda’s Mike Alessi battled for the holeshot in the main event, with Brayton getting the nod, but Roczen quickly cut to the inside of Alessi through turn two and then powered around Millsaps on the high side of turn three to take the lead before the pack entered the stadium’s long and treacherous whoop section. Roczen was clearly determined to set a fast pace, and he built a solid lead as Millsaps, Alessi and Tomac fanned out behind him. Dungey, meanwhile, was engaged in a battle with his training partner, Rockstar Energy Husqvarna’s Jason Anderson, for eighth place, behind the front four and also behind Team Honda HRC’s Cole Seely, Monster Energy/360fly/Chaparral Yamaha’s Chad Reed and BTO Sports KTM’s Justin Brayton. Dungey quickly dispatched Anderson just before the finish line jump.

Seely, Reed and Dungey all quickly got past Brayton on lap two, with Seely and Reed also dropping Alessi back to sixth place. Dungey also took away a spot from Alessi on lap three. Seely then tried to latch on to Tomac’s rear wheel as Tomac battled with Millsaps for the second spot. Tomac would pinch off Millsaps in the final turn before the finish line jump to move into second place, with leader Roczen already amassing a 3.7-second lead.

Dungey muscled his way past Reed for fifth place just as the pair entered the section outside the main stadium floor. Millsaps and Seely were just ahead of him, battling for the third spot, and that allowed Dungey to move even closer to them. Both men then passed Millsaps on lap five, with Seely making his move just after the whoops and Dungey cut under Millsaps two turns later to move into fourth place. Seely then stalled in a corner on lap six and allowed Dungey to sail into a podium spot. Millsaps gamely held onto fourth place at that point, but both Reed and Anderson were pressuring him.

Out front, Tomac had cut Roczen’s lead down to 2.4 seconds, and the Colorado rider would slash another second off that by the halfway point, but that was as close as anyone would get to the German, who stayed smooth and reeled off the remaining 10 laps to claim the race win with 4.5 seconds in hand. Afterward, Roczen thanked his team, his sponsors, his mechanic and his girlfriend.

“We’re getting stuff done,” Roczen said. “It is awesome to finally be at the top.”

Dungey, who had not finished worse than second place in 15 consecutive supercross main events prior to this one, methodically ate into the 3.3-second advantage that Tomac enjoyed. Dungey caught a break when Tomac nearly crashed in the whoop section and took the runner-up spot away with five laps to go, setting the top three. It was Dungey’s 16th consecutive first- or second-place finish and his 21st consecutive podium finish. That’s rock-solid consistency no matter how you slice it.

“I was pushing it,” Dungey said. “That start wasn’t the greatest, and the start…you’ve gotta be there. You saw Ken get out front, he started to go, and that’s where it’s at. I tried to make the passes happen as quick as I could. I could make them clean, and stick. [I had] a couple close ones, but I just was trying to drive, to get to the front, and try to give myself a chance at the end for maybe a win. But second’s not bad, and we’ll keep moving.

Tomac was happy to land his first podium in 2013 after finishing fourth in the first three rounds and seventh last weekend at the Oakland round.

“It has been a little bit of a tough start [to the season],” Tomac said. “You want to win and you want to be up here [on the podium] as much as you can, but you’ve got to be realistic. I had a big off time with injury and, obviously transitioning to the new team, but there have been times when I felt like I’ve had this podium speed but just never put it together in the main. This time I was able to get out there early and be up front and run with the lead guys. That was a nice change of pace. I just couldn’t quite put it all together at the end, but I did what I could. We definitely made improvements this week, coming into this round, and it paid off.”

Anderson made his way to fourth place by the end of the main, with Millsaps, Reed, Brayton, Seely, Red Bull KTM’s Marvin Musquin and Monster Energy Kawasaki’s Wil Hahn completing the top 10.

With the win, Roczen moved past Anderson into second place in the 2016 Monster Energy AMA Supercross Series points standings. He now trails Dungey by 21. Anderson is still third, 26 points back. 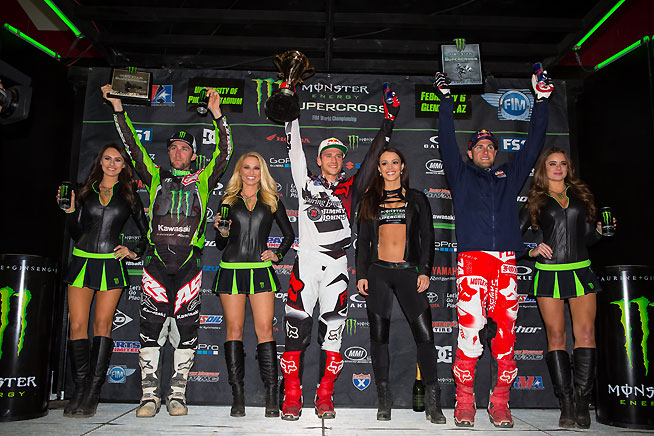