The following is from MX Sports Pro Racing:

Mechanicsville, MD (August 20, 2016)–A pair of champions were crowned at the penultimate round of the Lucas Oil Pro Motocross Championship, sanctioned by AMA Pro Racing, on Saturday as both the 450cc class and 250cc class titles were decided one round early at the GEICO Motorcycle Budds Creek National from Budds Creek Motocross Park in Mechanicsville, Maryland.

In the 450cc class, RCH Soaring Eagle/Jimmy John’s/Suzuki Factory Racing’s Ken Roczen continued his dominant ways, sweeping the motos yet again to claim his eighth overall victory of the season and clinch his second title in three seasons. In the 250cc class, Rockstar Energy Husqvarna Factory Racing’s Zach Osborne broke through for the first win of his career while Yamalube/Star Racing Yamaha’s Cooper Webb secured his first national title via a fifth-place finish.

450cc
After setting the fastest lap of timed practice earlier in the day, Roczen carried that momentum into the opening moto of the afternoon by emerging from the first turn with the lead and racing to the holeshot ahead of BTO Sports/WPS/KTM’s Andrew Short and Autotrader/Monster Energy/Yamaha’s Justin Barcia. The clear track allowed Roczen to do what he does best, setting a torrid early pace to establish a gap over the field. While Roczen sprinted away out front, Monster Energy Kawasaki’s Eli Tomac, the only rider mathematically alive in the championship entering the afternoon, found himself on the ground with another rider on the opening lap, eventually coming around in 39th place.

Clear of his closest challengers, Roczen consistently extended his lead and left the battle for the podium between Short, Barcia and Red Bull KTM’s Marvin Musquin. Barcia was able to make the pass for second on lap one, with Musquin following into third a couple laps later. They both settled into those positions until just past the halfway point when Musquin started to close in on Barcia’s rear fender. They engaged in a spirited battle for the runner-up spot, crisscrossing lines and using every inch of track, until Musquin emerged with the position on Lap 9. Behind them, Tomac was working hard to climb his way through the field and prevent Roczen from wrapping up the title with the moto win, breaking into the top 10 on lap nine.

Roczen cruised to his 17th moto win by 16 seconds over Musquin in second, while Barcia completed the moto podium in third. Autotrader/Monster Energy/Yamaha’s Phil Nicoletti finished fourth, with Red Bull KTM’s Dean Wilson fifth. Tomac made an impressive recovery to finish sixth and keep Roczen from clinching for one more moto.

The second moto saw Team Yoshimura Suzuki Factory Racing’s Matt Bisceglia grab the holeshot just ahead of Short and Roczen. As the field roared through the first section of jumps, Short surged past Bisceglia to take over the lead, with Roczen following through into second. Roczen’s opening lap pace allowed him to get around Short not long after that, from which he was able to once again open a gap by the completion of the opening lap. Short settled into second, while Barcia moved into third and Tomac into fourth. Both Barcia and Tomac would make their way by Short and assume the remaining podium spots on lap two.

With Roczen pulling away, Tomac made a push to get around Barcia. The two riders swapped positions in an entertaining battle where they used altering lines, with Tomac getting the upper hand on lap three. He would then pull away from Barcia, with Musquin looming not far behind in fourth. The lead pair settled comfortably into their respective positions, but Barcia and Musquin continued to inch closer together as the moto wore on. They would battle for the spot in closing laps.

Roczen took his 18th moto win 20 seconds ahead of Tomac, while Barcia was able to fend off Musquin’s pressure to finish third. It was the eighth time this season that Roczen swept the motos, doing so in each of his victorious outings, and was also the second straight weekend in which he led every lap of competition.

Roczen becomes the 12th different rider in history to win multiple titles and remains the only German rider to ever hoist the Edison Dye Cup. He’s also the fourth rider in Lucas Oil Pro Motocross history to win titles for with two different manufacturers. It is the first title for RCH Racing, with the team co-owned by Ricky Carmichael and Carey Hart becoming the first privately owned effort to win a 450cc class title.

“The Soaring Eagle/Jimmy John’s/Suzuki Factory Racing machine has been working great all year,” said Roczen, who more than doubled his career win total this season. “There are so many people I have to thank—my team, my family, my girlfriend and my trainer. We finally made it. I don’t really know what more to say right now. We have such a solid program that I’m just really happy with.”

Barcia posted a season-best finish in second overall (3-3), while Musquin completed the podium in third (2-4). Tomac missed out the box in fourth (6-2).

Following Saturday’s motos, Roczen and Tomac secured the top two spots in the final championship standings while Musquin missed out on clinching third place by just one point. The Frenchman has a 49-point lead over Barcia heading into the final round.

250cc
Drama surrounded Webb to start the opening 250c moto, as the Yamaha rider was involved in a first-turn crash that collected several riders. Out front, Monster Energy/Pro Circuit/Kawasaki’s Adam Cianciarulo grabbed the holeshot over Yamalube/Star Racing Yamaha’s Alex Martin. Both riders fought valiantly for the top spot on the opening lap, with Cianciarulo ultimately taking control. Behind them GEICO Honda’s Jordon Smith settled into third, with pressure from Monster Energy/Pro Circuit/Kawasaki’s Joey Savatgy in fourth. Webb made up ground after starting at the tail end of the field, but went down again and eventually crossed the line in 26th.

Cianciarulo managed to stabilize his lead over Martin, but the Yamaha rider kept him in sight. Approaching the halfway point of the moto Cianciarulo made a mistake in one of the track’s many off-camber corners and went down, allowing Martin to assume the lead on lap seven while Cianciarulo remounted in second. The early battle for third between Smith and Savatgy also heated up around this same time, with Savatgy making the pass. Smith would lose several more spots before ultimately recording a DNF.

Martin was able to withstand some late pressure from Cianciarulo to take his second moto win of the year at the same track where he earned his first career moto victory last season. He crossed the line 6.2 seconds ahead of the Kawasaki rider, with Savatgy third. Osborne followed in fourth, with Monster Energy/Pro Circuit/Kawasaki’s Austin Forkner fifth. Webb valiantly fought his way into sixth.
As the field raced to the first turn to start the second moto, Cianciarulo once again seized control of the lead to sweep the holeshots for the afternoon. He led a Kawasaki freight train with teammates Savatgy and Forkner running in second and third, respectively. Martin was mired outside the top 10, eventually finishing the opening lap in 12th, while Webb was faced with adversity yet again, narrowly escaping another crash after contact off the start, completing the opening lap in 17th.

Savatgy then made a mistake that dropped him from second to fifth while chasing Cianciarulo, allowing Forkner to take over second and Osborne, who started fifth, to move into third. Forkner was able to slip inside of Cianciarulo and take over the lead on lap four. Cianciarulo lost another spot not long afterward, giving up second to Osborne.

The Husqvarna rider’s path to the front continued as Osborne patiently waited for his opportunity to mount a challenge on Forkner, briefly doing battle with the rookie before moving out front on lap seven. Once in the lead Osborne was able to extend his advantage while Forkner settled into a solid second place. The battle for third intensified in the late stages of the moto as Cianciarulo was forced to deal with the Yamaha tandem of Webb and Martin, who had both charged their way through the field. After Webb marched past the Pro Circuit Kawasaki duo of Savatgy and Arnaud Tonus, bringing Martin along with him, he moved into podium position by passing Cianciarulo on lap 12. Just one lap later Martin passed Cianciarulo for fourth.

Osborne rode a strong second half of the race to take his second career moto win, crossing the line 7.2 seconds ahead of Forkner. While Osborne celebrated the best outing of his career, Webb enjoyed the spoils of clinching the title with a third-place finish. He becomes the 28th different 250cc class champion to lift the Gary Jones Cup.

“I don’t know what to say—I honestly didn’t think I would be here at the start of the season with this [wrist] injury and everything like that, so to be able to do this in unreal, especially in front of my home fans and the home crowd,” said Webb, a native of nearby North Carolina. “Unfortunately it wasn’t the day we wanted [on the track], but we made it happen. That’s what champions are made of. You get knocked down and get right back up. We showed them [the 250cc field] how to do it.”

The overall classification for the afternoon left Osborne and Martin knotted atop the standings with identical moto scores, but Osborne’s second moto win (4-1) gave him the tiebreaker over Martin (1-4), who once again found himself on the losing end of the winning tiebreaker at this event last season. Forkner rounded out the overall podium in third (5-2).

“My team rallied,” Osborne said. “We had a tough weekend last weekend with two DNFs and the past few weeks have just been tough for us. I’ve worked at this a long time. I almost won a moto here at Budds Creek in 2006 and it started a lot of issues for my career. It’s ironic and wholly gratifying to win here. I don’t really even know what to say. I can’t even come to terms with it, it’s just an unbelievable feeling.”

Martin’s runner-up effort ensured a career-best championship finish in the final standings. He currently sits second, 23 points ahead of Savatgy in third, but is clear of Forkner in fourth by 53 points heading into the final round.

The Lucas Oil Pro Motocross Championship will host its 12th and final round of the 2016 season next Saturday, August 27, from Ironman Raceway in Crawfordsville, Indiana, with the Third Annual Ironman National. 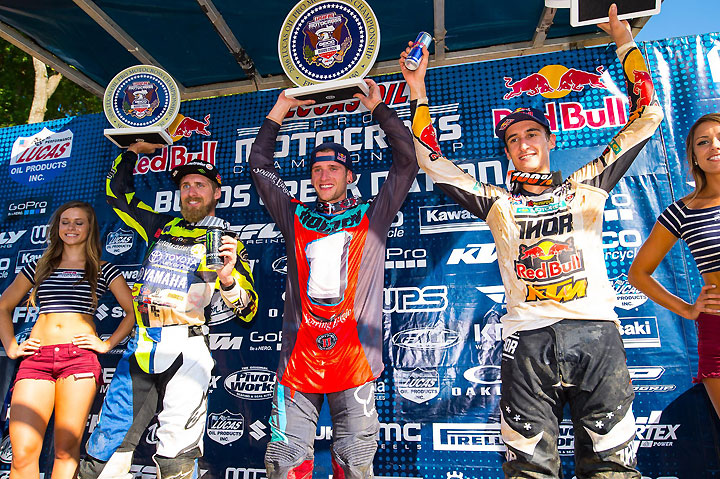 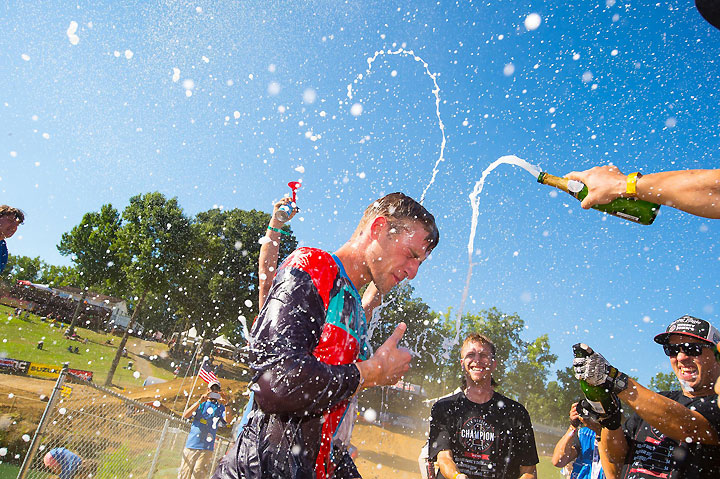 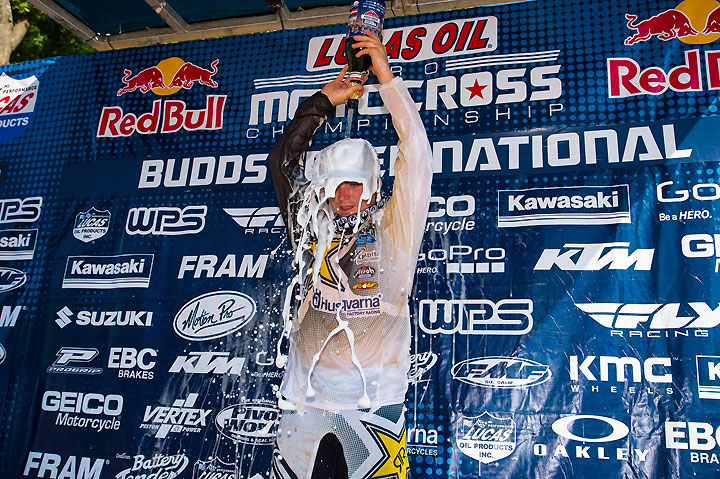 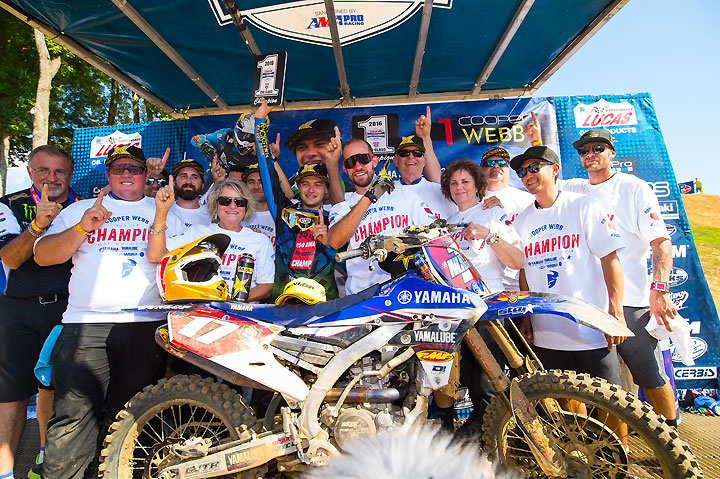