Is Cody Webb on the brink of a GEICO AMA EnduroCross title?

Is Cody Webb on the brink of a GEICO AMA EnduroCross title?

GEICO/Beta USA/Stillwell Performance rider Cody Webb maybe moving on to KTM, but he appears to be in excellent shape to give Beta its first GEICO AMA Endurocross Championship before he goes.

Webb scored a big win Satudray night at Ford Idaho Center in Nampa, Idaho, and he now has a commanding lead in the 2014 GEICO AMA EnduroCross series standings with only the series finale in Ontario, California, remaining on the schedule. The win, his third of the year, gives Webb a 13-point lead over Rockstar/JCRHonda/Lucas Oil’s Colton Haaker and 15-point lead over five-time and reigning GEICO AMA EnduroCross champion, Taddy Blazusiak of the Red Bull KTM team.

Christini AWD rider Wally Palmer grabbed the Nexen Tire Holeshot award when the Pro main event left the starting line, narrowly escaping a first-turn pileup behind him. Webb and Factory FMF/KTM’s Taylor Robert managed to avoid the trouble and slot into second and third place, respectively. Both Webb and Robert passed Palmer early in the race, while Cory Graffunder and Geoff Aaron occupied the fourth and fifth spots, respectively. Blazusiak, meanwhile, was a victim of the first-turn carnage and was mired in in 11th place,l with fast qualifier Mike Brown also running ninth after he hit the ground in the first turn.

Haaker quickly began to make his way toward the front of the field, moving into fourth place by just the third lap. Blazusiak also made up for lost time by passing his way to fourth by lap five.

Haaker may have been the fastest rider on the track, as he passed Robert for second and charged after Webb, who had stretched his advantage to about 7 seconds. Haaker took 4 seconds out of Webb’s lead with two laps to go, and he went all-out on the last lap into the first woodpile, very nearly pulling alongside Webb in the final corner on the last lap. Haaker’s challenge for the lead came to an abrupt end when he crashed in the loose wood just yards from the finish line. Webb took the win. Robert got around Haaker for second. Haaker recovered to finish third.

Webb was obviously pleased with the way the night went.

“After the start I came out in second and got by Wally pretty quickly,” Webb said. “After I got into the lead I wanted to race just like I did in the heat race, do lap-after-lap consistently with nothing crazy and that’s what I did. I heard Colton coming on strong there at the end and he was on it. It’s hard to push that hard at the end of the race and when he went down I knew it was good for me. I’m happy to get the win in Idaho since I haven’t won here before.”

Robert was glad to come in second after the crazy start and the challenge by Haaker.

“I honestly have no idea how I came out of that so well,” Robert said. “I was dabbing on the outside of the turn, fully leaning to the outside about to fall and someone ran into me from the outside and knocked me back upright. I came out third and we (Cody, Colton and I) were able to get up front. Colton got around me and I made a few mistakes that dropped me back a bit. His fall in the nasty firewood let me get a spot back again. I couldn’t really see what happened but I think Colton was the fastest guy tonight, he just had to come from behind. It’s EnduroCross for you! I want to keep mixing it up with these guys and now that I’m up here I feel great.”

Naturally, Haaker was disappointed, as he knew that a win could have cut into Webb’s points lead as the series heads into the final round in Ontario next weekend.

“I don’t even know what happened on the start but I didn’t get a good jump and tangled with a lot of guys that kept me upright,” Haaker said. “I came out quite a ways back but got into third pretty quickly, into second, had to re-pass for second after a lapper fell in my line—typical EnduroCross where I lose 10 seconds instantly. From there, I had four or maybe five laps to get to the front and I was giving it everything I had. I thought if I could jump the first firewood pile in front of Webb I would have him and, dang it, EnduroCross’ luck of the draw didn’t work out for me tonight.”

The Cyclenano Women’s class had the fans in Idaho on their feet as the race win went down to the very last corner, yet again, with Sherco rider Lexi Pechout taking her first win. Pechout battled with Husqvarna’s Sandra Gomez and prevailed after Gomez got stuck in the woodpile. Shelby Turner was third.
Pechout said that she was happy just to get good start compared to the dead-last starts she usually gets.

“Then, the second log on the course had a huge pile-up where a lot of us had to stop,” Pechout said. “I saw a spot and went for it, racing in fourth. I saw the spotlight on me after going past Gomez and I thought, ‘Oh my gosh! I’m in the lead!’” 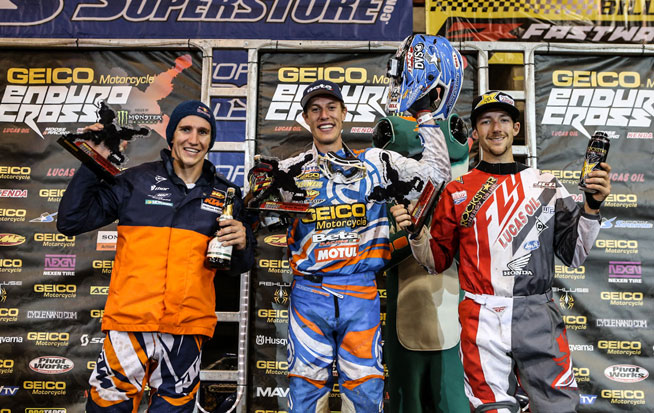