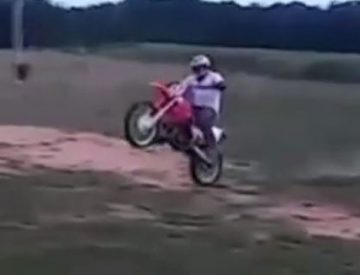 We appreciate freestyle motocross as much as the next guy or gal, but this particular back flip fail takes the cake.

Posted by Daily Motocross on Facebook, this particular attempt is more “Nitro Suckis” than Nitro Circus, as the rider appears to have forgotten the cardinal rule of freestyle: If you’re going to pull an insane trick maneuver, make sure you take the bike with you. Then again, it’s possible that the rider did rejoin his machine out of camera range…Nah. While it is hard not to laugh, we hope that this particular speed demon came out of it with little more than a bruised ego for his efforts.

One other caveat: There is a tiny bit of colorful language uttered by the cameraman, although it pretty much describes the incident perfectly, and it’s nothing you probably haven’t heard already.