Husqvarna really built a winner with its 2017 TX 300cc two-stroke off-road machine, but Jay Clark of Jay Clark Enterprises knows a thing or two about how to give the Husky even more zip for serious off-road competition or heavy-duty trail riding.

Clark’s goal with the TX 300 was not to mess up an already great bike by altering its quick yet easy-to-ride character. The mods he made are intended to increase the TX 300’s durability and get it more trail or race worthy for long rides or desert races such as hare & hounds, GPs and the like.

Using the might of the Rocky Mountain ATV-MC’s parts arsenal, Jay did what Jay does, throw every relevant aftermarket part at his disposal on this particular project bike, seeking improvements as he saw they were needed.

Turning his attention to the TX 300’s engine first, Clark sought just a little more oomph, better breathing and better cooling. Starting with the top-end, he had Metaltek cut .016″ off the cylinder head to give the TX 300 just a little more compression, which makes more power. The beauty of the mod is that it doesn’t alter the octane requirements of the engine.

“You can go tighter, but then you get into having to run race gas or av gas,” Clark said. “This head mod will give you a modest bump in power while still being able to run 91-octane pump gasoline.”

While inside the engine, Clark also added a Vertex Pro Replica kit, which includes the piston, ring set and clips. This isn’t really much of a “mod” as Vertex is the OE supplier of two-stroke pistons to Husqvarna and for good reason. The gravity cast aluminum alloy Vertex boasts 12-21% silicon content, which helps to decrease thermal expansion and better maintain the shape of the piston when the engine reaches normal operating temperatures. Vertex claims that because of this its pistons can be run at tighter tolerances for more power, less noise and a longer lifespan.

The head wasn’t the only thing that Clark cut. He also sawed and drilled away a considerable amount of plastic that makes up the Husky’s stock airbox, allowing a lot more air to pass through the new UniFilter two-stage air filter and into the TX 300’s Mikuni TMX 38mm carburetor, a carb chosen by Husqvarna because it is claimed to deliver great throttle response while being less sensitive to elevation changes. However, the increased air flow and the head mod did require swapping the stock jets. Clark fiddled with the Mikuni before settling on a 420 main jet, a 37.5 pilot jet and a 14-75 needle jet. He also made a small cut to the carb slide’s v-shape and blended the slide surfaces to improve throttle response even more.

To give the engine a broader hit, Clark also opted to swap the stock pipe with an FMF Racing Gnarly pipe and PowerCore2 silencer. The Gnarly pipe focuses on increasing the low-rpm horsepower and torque and mid-range pull, the perfect combination for off-road riding and racing. Its 18-gauge steel construction makes it more beefy than a stock pipe, which helps to reduce the chance of a dent or a ding from rocks and other debris. The aluminum-extruded PowerCore 2 silencer boasts a perforated core for improved exhaust flow.

Because the engine would run hotter than a stocker, Clark also added a few components to maintain a more consistent engine temperature on tight and/or gnarly rides. A Trail Tech radiator fan was added along with a CV4 high-pressure radiator cap. You can’t see it, but the TX 300 also received an IMS radiator overflow catch can that is mounted inside the main downtube. The only clue that it’s there is a small Allen-headed screw on the downtube.

Clutch life is a consideration on two-strokes, even 300s, as the rider is more likely to spend a fair portion of time slipping the clutch to get the power to the ground in the most efficient manner, so Clark opted to beef up the TX 300’s hydraulically-operated clutch by adding a Hinson Racing clutch kit. The Hinson comes with all the necessary parts for the swap, including fiber plates, steel plates and new springs. To give the bike a more hot-rodded lock, a Hinson outer clutch cover was also added.

Considerable testing has already made Clark a fan of the Husqvarna TX 300’s new WP 48 AER fork, so much so that he didn’t feel the need to fuss with valving changes to make the front end work to his satisfaction. The only deviation from stock is a reduction in air pressure from 154 psi to 135 psi, which gives the front end a more compliant feel over harsh terrain. Out back, the TX 300’s WP shock now wears a stiffer, 4.6kg spring from Race Tech, but the shock itself still features the stock valving as well.

Knowing that this machine was going to spend a lot of time bashing through brush and over rocks, Clark also added a fair number of guards and other protective pieces to the TX 300. Starting from the top down, Clark went with a set of Cycra Racing’s Ultra Pro-Bend full wrap-around handguards to prevent any swollen fingers from a clash with a tree branch or trunk. Bullet Proof Designs radiator braces and a rear swingarm guard also add to this TX 300’s ability to survive a crash, while P3 Carbon’s Composites carbon-fiber pipe guard and full coverage carbon skid plate protect vital components from rocks and roots. Since low-hanging components, such as the swingarm linkage and the rear brake disc are also susceptible to damage, Clark fitted a swingarm linkage guard from Pro Moto Billet and a rear brake disc guard from Tusk Off-Road. While not necessarily a crash protection item, Scar’s titanium footpegs offer a measure of security via their aggressive serrated “teeth” to give the rider’s boots better grip when the going gets wet and gnarly.

Speaking of the brakes, higher speeds might also require the need for improved braking, so Tusk Off-Road was tapped to supply an over-sized front disc brake kit and adaptor bracket along with a new rear disc. While he was at it, Clark went ahead and fitted the TX 300 with a complete Tusk Off-Road front and rear wheel set, adding Dunlop AT81 front and MX3S rear tires. Other Tusk items include brake and sprocket bolt kits as well as a lightweight Lithium battery to help ensure that the electric-start 300 fires up with ease.

Renthal Fat Bars add some durability as well as good looks to the control set. The bars are fitted with Renthal’s Tacki Grips. The replacement 51-tooth sprocket on the TX 300 is a Renthal item, and it is pulled by a Primary Drive O-ring chain from Rocky Mountain ATV-MC.

All that remains is cosmetic, and we may be partial, but we like how the Attack Graphics custom graphics kit turned out with the DirtBikes.com logos as part of the package. Ditto for the Moto Seat Custom Cool seat cover. And although the Husqvarna TX 300 comes stock with a sidestand, Clark went ahead and customized a Works Connection bike stand to give the Husky a cooler overall aesthetic appeal in our static photos.

Of course, none of these mods would be worth much if they didn’t improve the overall performance of the TX 300, but they do. While the engine definitely has more bark, it’s still smooth overall and surprisingly quiet—we expected a more noticeable noise emissions from the FMF exhaust system and muffler, but the exhaust note was more than tolerable. Then again, maybe that’s because we just aren’t used to the different sound of a big-bore two-stroke when compared to all of the four-strokes we’ve tested lately. The engine mods give the TX 300 a smooth but firm hit down low with nice a transition into a meaty midrange. The quickness of the bike is even more deceptive than the stocker, and pulling a taller gear is easy.

Likewise, the TX 300’s suspension feels nicely balanced, although it is a little on the stiff side for our tastes, especially at lower speeds. Still, we have little doubt about its capability to slam through some pretty gruesome country while helping the Husky track straight and true.

One more thing was really noticeable, the front brake. The Tusk over-sized front brake rotor delivers serious stopping power, a feature that caught one of our testers by surprise when he hacked the brake lever while attempting to slow for a rain rut that he didn’t see coming. The front end locked up immediately, and only a quick release kept the bike upright and still looking shiny. One finger on the lever will do just fine, thank you!

Overall, we really dig the work that was put into this project TX 300. It runs stronger, stops better and looks way more trick than a stock Husqvarna. It’s also ready to take on the outback with better reliability thanks to the added bash protection and the cooling mods. All the key parts are available from www.rockymountainatvmc.com, so if you have a KTM or Husqvarna two-stroke and one or more of these mods appeal to you, that’s a good place to start. 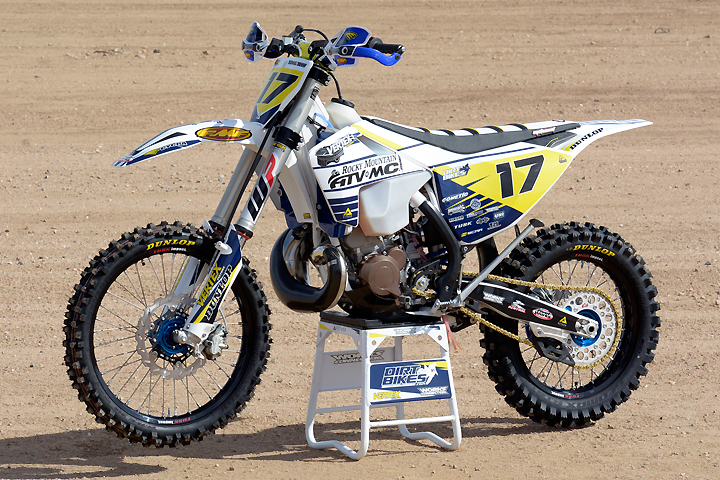 Overflow bottle in the frame