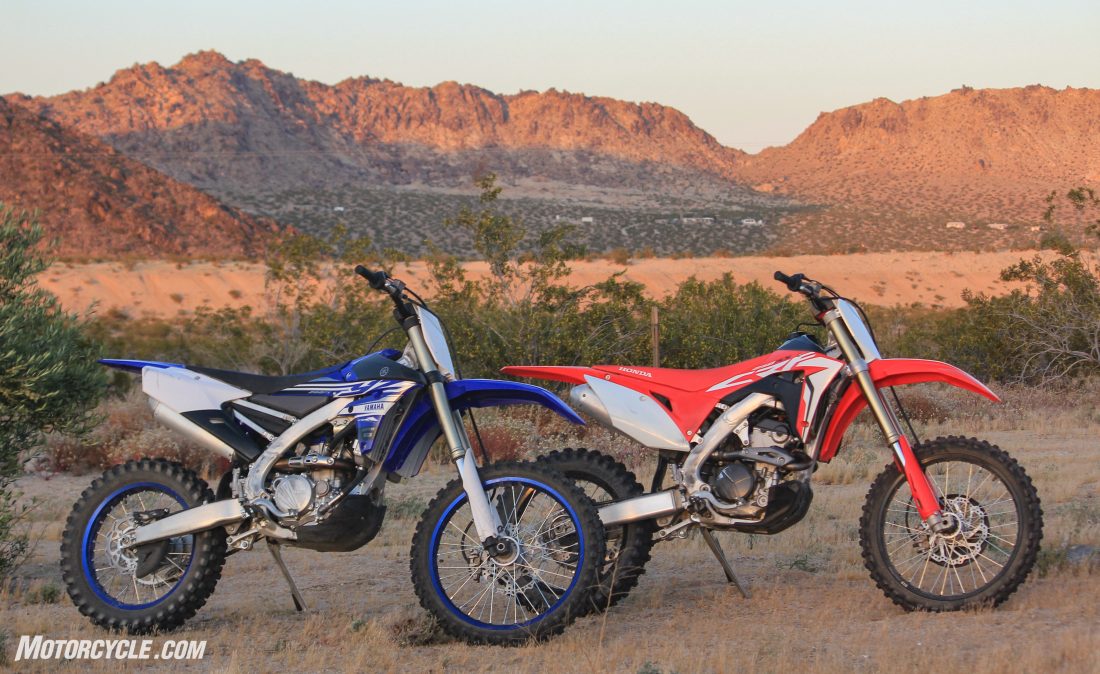 Not that long ago riders had only one option for a high-performance, 4-stroke 250 and it took the form of a purpose-built motocrosser. And in the beginning, these newcomers were designed as direct replacements for 125cc 2-strokes, which limited their appeal to a fairly narrow spectrum of younger, track-oriented buyers. Fast forward to today, and we have a number of manufacturers extending this platform into a crop of very versatile off-road weapons. These new, competition-oriented 250 thumpers are appealing to riders of all ages, riding styles, and terrain preferences. Progress is good.

Currently, Honda and Yamaha are the only two Japanese manufacturers competing in the off-road competition segment. Yamaha has had its YZ250FX on the market since 2015 while the Honda CRF250RX entered the field in 2019. So, how do these two machines stack up? We left the urban sprawl of Los Angeles and ventured deep into the California desert to find out.

Differences between the two were immediately apparent. After two full days of testing the 2019 Honda CRF250RX and Yamaha YZ250FX, we were surprised by how differently the two manufacturers chose to tackle the job of building off-road competition machines. These two bikes represent near polar opposite ways of doing the same thing. Both are a blast to ride, yet couldn’t be more starkly contrasted. Let me explain.

Minutes after swapping bikes on our test loop, it became clear that Honda and Yamaha had two different ideas in mind of how to tackle a GNCC-style competition bike. The Yamaha has tons of torque down low and into its mid-range, which allows for effortless climbs and quick hits of power when changing direction through tight trails. The Honda is softer off the bottom and makes much of its power higher in the rpm-range, giving it solid mid-range that screams into the top end and begs to be revved out.

Both handle tight trail work with ease, though the Yamaha gets the upper hand thanks to its stronger bottom end. Having heaps of torque down low makes riding the YZ250FX a bit easier than the Honda. With the CRF250RX, you’ve got to keep the engine spun-up to ensure you don’t flame-out and stall at the most inopportune of times. That being said, the Honda is easy to ride, you just have to keep the engine revving high enough to stay in the meat of its power. The Yamaha’s party does come to an end much quicker at high rpm than the RX, though. 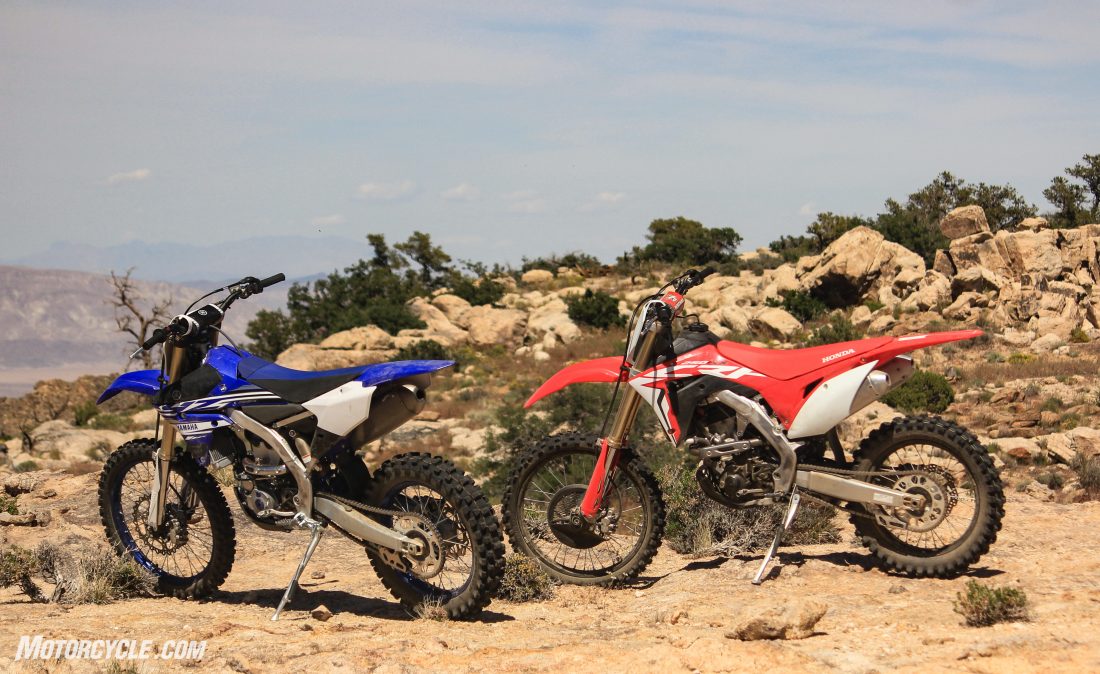 The Yamaha’s hard hitting low-end power is welcome out here in the California terrain but may be a handful in muddy slick conditions found in other areas. The CRF250RX has an answer to this problem: The RX includes three adjustable on-the-fly fuel maps as well as three levels of launch control – all controlled via an electronic switch on the left side of the handlebar. By choosing between the three map settings, you can enjoy a softer, more controlled power delivery for snotty conditions, or more aggressive settings when traction is sweet. Handlebar-mounted switchable maps will be available on the 2020 Yamaha YZ250FX, but in the meantime, you can purchase the GYTR accessory Power Tuner to make adjustments to the mapping yourself. The Yamaha does, however, include two helpful lights behind the number plate to let you know if you’re having engine trouble or about to run out of gas.

Getting power to the ground reveals the next biggest difference between the two. The Honda uses a close-ratio five-speed transmission, while the Yamaha has a six-speed wide-ratio trans. For tight GNCC-type race courses, many might prefer the close-ratio transmission of the Honda. It’s the same as the one found in the CRF250R and delivers positive shifts with a very light pull at the lever. The Yamaha transmission is equally smooth, delivering solid shifts but at a wider spread through its six gears making it more suitable for desert racing or hare scrambles. For a guy like me in California, who would be more interested in using the bike for trail riding primarily, the wide-ratio transmission gives the preferred spread with first gear lower for tight technical sections and sixth for wide-open spaces.

Both machines sport the magic button on the handlebars and spark to life with a quick tap. The Honda comes standard with a Li-ion battery while the Yamaha uses a more traditional lead-acid type. Neither bike comes with a kickstarter, though the Yamaha can be fitted with one from Yamaha’s Genuine Accessories catalog. 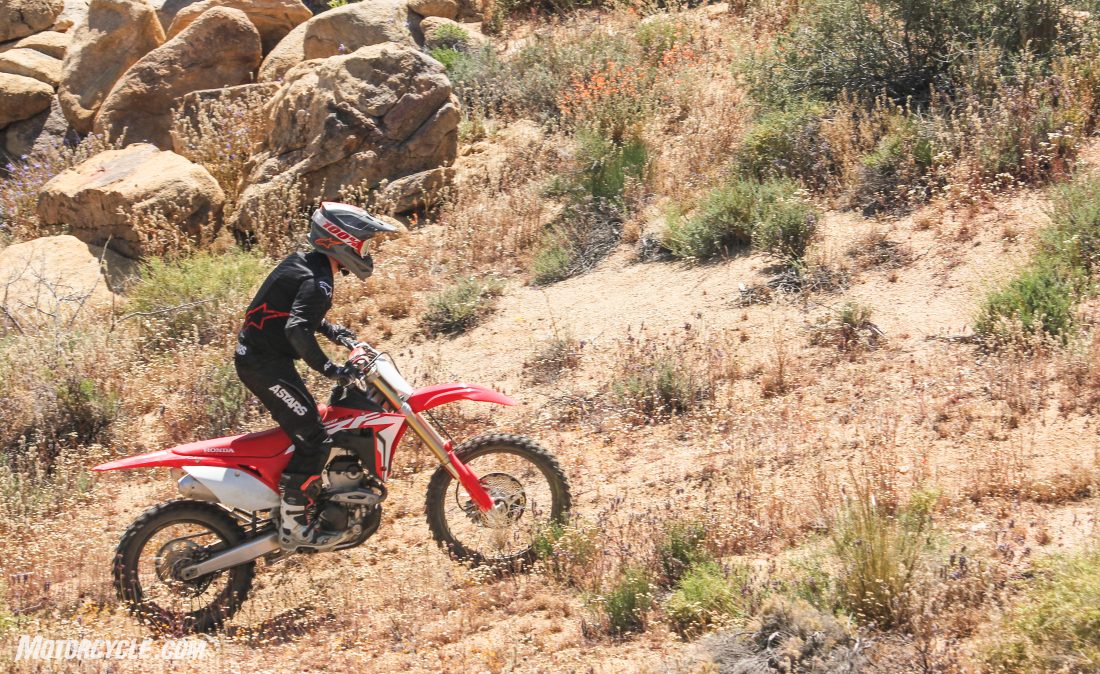 Both bikes fit my 5’8” frame pretty well, but the Honda fits damn near like a glove. Without so much as rolling the bars forward or back, the RX fit me perfectly. The Yamaha, even with the bars back all the way, felt roomy, which may help it to be suited to slightly larger folks. Both bikes have four-way adjustable bars that’ll allow riders to fine tune their riding position. The RX and FX’s footpeg-to-seat measurements are nearly identical at approximately 22 ¼ inches. The Honda’s seat height is just 0.3 inches lower than the Yamaha’s 38-inch saddle, but it feels even lower.

Gas tanks differ in design and capacity between the two. The Honda uses a more standard design with its 2.25-gallons protruding out toward the shrouds. This can make the bike feel a bit top heavy when fully-fueled and causes the bike to feel somewhat wide when you’re fully choked up on the tank. The FX’s 2-gallon tank is located under the seat which keeps the shrouds slim and weight more centralized. There are aftermarket options for each up to just over three gallons, should you decide you need more capacity.

Seat style and shape were noticeably different between the two bikes. The Honda had a slightly more curved, “sit-in” feel while the Yamaha had a flatter, more MX-style feel. Both have textured top panels for good grip, wet or dry. 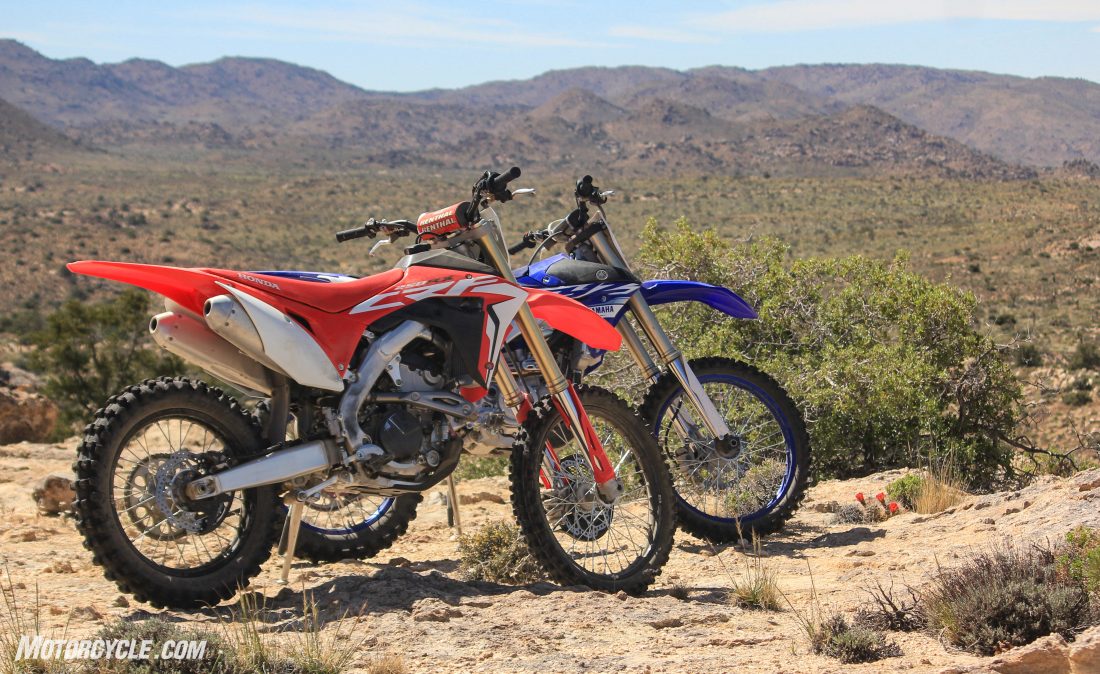 Both the Honda’s Showa suspension components and Yamaha’s KYB units are fully adjustable front and rear, and neither bike employs an air fork. The Honda delivers a more plush, comfortable ride while the Yamaha’s suspenders feel more set up for racing, and it’s clear when railing through a set of corners. The Yamaha generally felt more planted under acceleration and braking, even though it’s wheelbase is actually slightly shorter, and rake is 0.7 degrees steeper, which might make one think otherwise when looking at the specsheet. At slow speeds, the Honda feels nimble and easily tiptoes around and over obstacles where sometimes the Yamaha felt harsh. After making some adjustments to both bikes’ preload, we had them both sitting in what we felt was a very balanced state.

Happily, neither of these bikes presented us with any rude surprises or weird handling quirks. Though different in overall feel, both were eminently predictable and did what we told them to do, whether on fast two-trackers or more technical single track trail. We found the Yamaha easier to loft the front wheel when needed, likely due to its centrally-mounted fuel-tank and harder bark off the bottom.

For the best out-of-the-box comparison, we ran the clickers at the factory-recommended settings. As noted above, the Honda felt more plush overall, but the Yamaha felt like it maintained its ride height more consistently. We didn’t get specs on spring rates, but the blue bike felt like it may have slightly stiffer spring rates as delivered. Increasing the compression damping on the Honda may help maintain the ride height, but you may lose some of the plushness in doing so. Bottom line, we felt that the Honda’s spring rates would likely need to be bumped-up for anyone over 175 pounds.

Brakes on both machines got them slowed down quickly and predictably. Lever feel on the Honda is slightly more moto-like, whereas the Yamaha has more of a progressive feel throughout the lever pull.

While neither of these bikes have a dedicated lighting coil built into the stator, they both produce DC power for the FI and battery charging systems. Thanks to the extraordinary efficiency of today’s LED lighting products, it may be possible to add a modest headlight and tail light. Experts at companies like Baja Designs could guide you if needed. 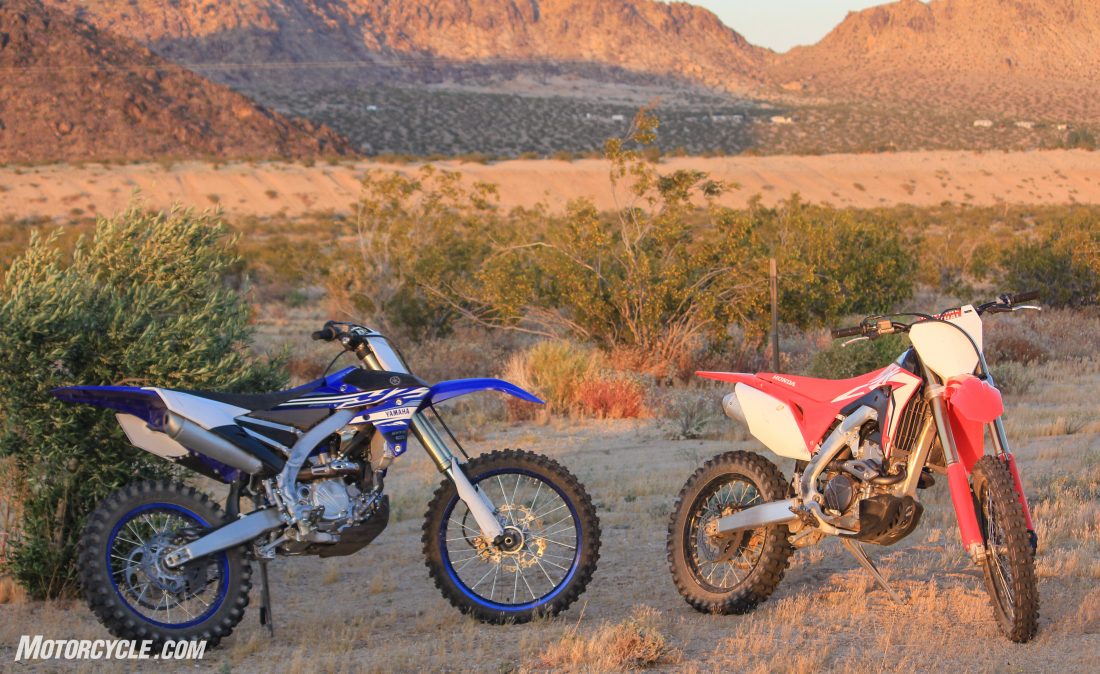 There you have it. For two machines in the same class and aimed at the same target, the Honda and Yamaha are about as starkly contrasted in their character as they are in color. Both bikes have their strong points, and it’s our job to highlight them and let you pick the bike based on that, not what X publication says is the winner. There’s a good chance you may not feel the same way depending on how and where you like to ride.

Overall, I would say the Honda is an easier trail bike to live with. You can race it, you can trail ride with it, and it will be comfortable and exhilarating at the same time. The Yamaha is more performance oriented all the time, which can be a lot of fun if that’s what you’re after. Both the RX and FX provide an exciting ride. Coming from an avid trail rider, not a racer, these are the bikes I would rather live without on the trail. They both provide the more thrilling performance-focused ride of their motocross brethren while having the necessary off-road accouterment. Personally, I would take one of these over their trail-focused counterparts any day, that is, unless I lived in California and wanted a green sticker bike; these are both red sticker machines, which means you’re only supposed to ride them on designated trails from approximately October through May (check your riding area as they tend to vary slightly) or on closed competition courses. I guess there really is a bike out there for any situation. That’s why there’s always room for one more in the garage.