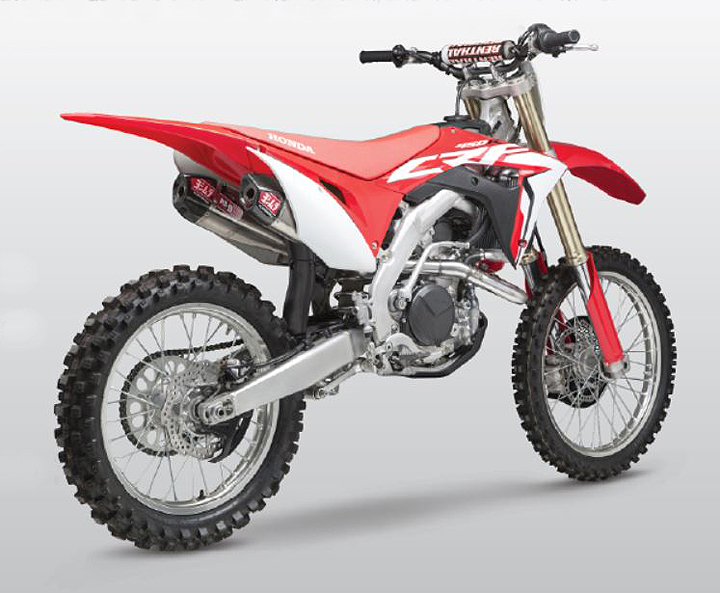 As much as the 2017 Honda CRF450R has been anticipated, it’s no surprise that Yoshimura R&D has already created a serious aftermarket upgrade in the form of its new Signature Series RS-9T tapered dual muffler system for the CRF450R and forthcoming Honda CRF450RX.

Yoshimura says that the 2017 CRF450R’s new engine and muffler configuration gave it the opportunity to create an entirely new system built specifically for the bike, and the end result is a system that has been co-developed with American Honda engineers.

“We have more hours of development than anyone, hands down,” Yoshimura Corporate Communications Manager Erick “Big E” Bartoldus, told DirtBikes.com. This system has been dyno and track tested by Honda R&D in Japan, HRC Honda Europe, the American Team Honda HRC and the HRC All Japan MX Racing Team, and the production Ti system is the same system that Ken Roczen ran at the 2016 Monster Energy Cup.” 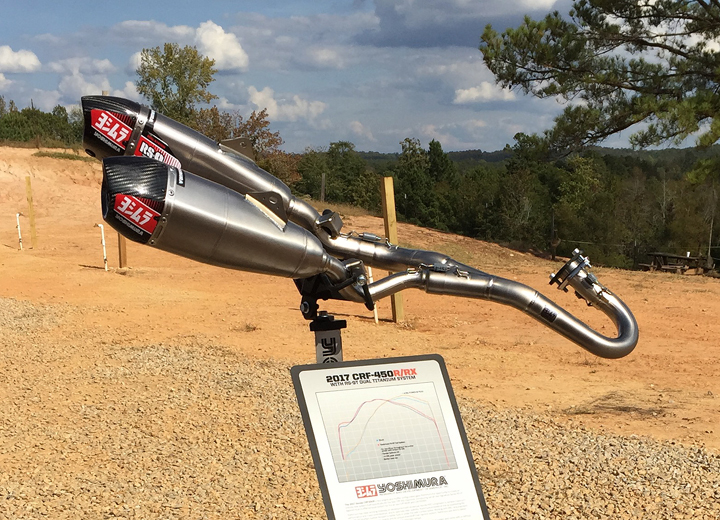 The SR-9T is designed to achieve maximum performance and mass centralization, and to optimize rider usability. To accomplish these goals, Yoshimura has positioned the RS-9T mufflers further forward to better tuck in under the CRF450R’s side number plates. Up front, the three-stage titanium header is constructed of Japanese titanium, which Yoshimura claims is the best grade of titanium on the market. The titanium exhaust system is claimed to weigh 1.5 lbs. less than the stock system and also deliver more tractable power, improved torque and better throttle response from the CRF450R’s new 449cc Unicam engine and downdraft fuel-injection system.

Other RS-9T features include a new tailpipe divider creates a smoother exhaust flow and better velocity to the right and left tailpipes and larger mufflers cores for improved throttle response and stronger mid-range and top-end performance. At the same time, Yoshimura says that the RS-9T mufflers have more volume than stock to provide a decrease in overall dB noise level.

The new Yoshimura Signature Series RS-9T dual systems are available as a slip-on muffler set or a full system, and will fit with or without Honda’s new optional electric start system in place.