If the all-new 2017 CRF450R was the motocross bike we’ve been waiting for from Honda for a long time, then the 2017 Honda CRF450RX is the off-road racer that we didn’t know we were waiting for.

Hot on the heels of its successful launch of the Honda CRF450R at Monster Mountain MX Park in Alabama, Honda invited us to sample the CRF450RX closer to home at Cahuilla Creek MX Park near San Diego, California. The company laid out a four-mile GNC-style loop, consisting of tight, rocky single track trails, and we turned DirtBikes.com test pilot Ryan Abbatoye loose on it to tell us what he thought. 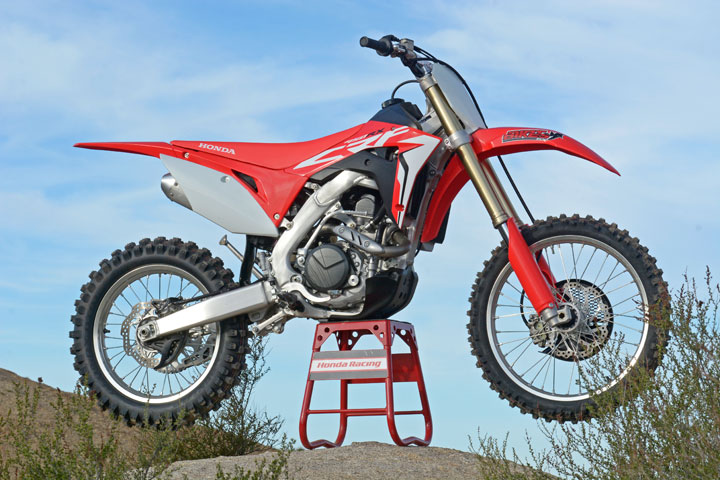 In case you need a quick refresher on the nuances between the CRF450RX and the CRF450R, there are a few. In the engine department, a smoother, more off-road oriented ignition map and standard-equipped electric start (the kickstarter is retained for backup are the main engine differences between the CRF450RX and its motocross-bred sister. The RX’s shared all-new Unicam SOHC engine features a compact cylinder head and valve train with same 2mm narrower valve angle and finger followers between the intake lobes and the intake valve stems along with a single forked rocker arm with a DLC (Diamond-like carbon) coating to open the exhaust valves.

There is no difference between the RX’s camshaft specs and those of the R. Both feature more lift than the 2016 CRF450R’s cams, with .5mm more lift (now 10mm lift) on the intake lobes and .85mm more lift (8.8mm lift) on the exhaust lobe. The engine also features larger intake valves and oval cross section valve springs. The RX gets the same three-mode Engine Mode Select switch mounted on the handlebar, allowing the rider to adjust the power hit based on riding conditions or rider preference.

Just like the 2017 CRF450R, the CRF450RX’s intake tract is mounted high in the chassis, which required the engineering of a new airbox that creates more of a downdraft intake layout to give incoming air a straight shot to the RX’s 46mm Keihin PGM-FI throttle body. Farther downstream, a new combustion chamber and a new piston with a compression ratio of 13.5:1 are incorporated to boost performance. Since added compression ratio equals added heat, an oil jet with a four-hole piston cools the underside of the piston. As for the oil system itself, the CRF450RX gets a new one with a dual-stage scavenge pump that is claimed to reduce pumping losses. The new Honda motor makes due with just 1250cc of oil volume, which helps to cut down on engine weight.

During Honda’s launch, Abbatoye took the CRF450RX out for a few laps at Cahuilla and came back with a grin on his face.

“From the moment that I first got on the bike, I felt comfortable right away,” he said. “It doesn’t feel like your typical off-road bike. An off-road bike usually feels bigger, longer and is a little harder to maneuver. This thing feels really light and comfortable.”

Part of that light feel has to do with the CRF450RX’s brawny engine. Abbatoye reported that the engine delivers plenty of low-end grunt, just like the R, and it is smooth and responsive to throttle input.

“Power is a lot better than I expected,” Abbatoye said. “Just from riding all the previous generation Honda, I didn’t expect it to feel this strong. It comes off the bottom really hard. The dirt is wet so there is good traction everywhere, but coming out of a corner on some off-road bikes such as the CRF450X. you’ve got to try to wheelie over something. With the RX, the power is right there. I actually had to lean more forward than normal, like on a motocross bike, just to make sure my weight was in the right place when I grabbed a handful.”

Abbatoye also noted that the 450RX’s five-speed transmission and clutch contribute to one smooth-shifting package. The RX and the R share the same exact transmission ratios, but in an effort to give the RX a little tighter gearing for woods work, Honda fitted the RX with a one tooth larger, 50-tooth rear sprocket. Not necessary, says the “RAD one.”
“There were a couple spots on the loop where I did find myself in between gears,” Abbatoye said. “I would either be too revved out in the lower gear but not have enough of snap in the next higher gear. Honestly, I would probably try the 49-tooth sprocket to give it the same final gearing as the CRF450R.”

However, Abbatoye also pointed out that the RX’s Engine Mode Select switch can come to the rescue in some situations.

“In super tight stuff, I think running the most aggressive map is the best because I like to run a taller gear, and that map makes it more responsive when you run in a taller gear,” he said. “When you ride in a higher gear in the stock map, it feels like you are running in too tall a gear and you are putting a little too much load on the motor, and it lacks that snap I was looking for. Running the more aggressive map solves that problem in the slower single track.”

There isn’t too much wide open, desert-type terrain at Cahuilla Creek like the desert, so Abbatoye also tested the RX on the facility’s motocross and TT tracks to test its upper rpm pull.

“I can say that it never fees like it runs out of power,” he said with a smile. “It would be nice to take the RX out the desert to see how it performs in really fast stuff. I think it would do really well. Honda obviously built the bike for GNCC racing, and the area that we rode was perfect for that bike, so they did a good job of selling it for that purpose!” [laughs].

Of course, one of the more hyped specs of both the 2017 CRF450R and the CRF450RX has been the fully adjustable, 12-inch-travel, 49mm Showa coil spring fork, which features internals spec’d from Showa’s race kit suspension. Out back, a new Pro-Link rear suspension with a shortened swingarm includes a fully adjustable Showa shock with a top mount that is 39mm lower in the chassis to lower the bike’s CofG and to clear the new airbox layout. Honda says that the new rear suspension design parameters shift the load ratio rearward for improved traction. Rear wheel travel is 12.3 inches, .1 inch less than the CRF450R.

The RX’s fork and shock are valved for off-road use, which is intended to give them a supple feel in rocky or root-infested terrain. Abbatoye said that, for the most part, the suspenders work well.

“The fork works great everywhere, but the shock is a little on the soft side for me,” Abbatoye said. “I noticed that it feels really smooth over spiky bumps, but it tends to blow through its travel a little too easily when you encounter a big hit at speed. We didn’t get the chance to make changes to the clickers, but you’d have to mess with it a little to dial it in and get the front and rear suspension in balance. I don’t think it will be a problem for most riders. Honda’s stock settings are definitely in the ballpark.”

Enough that the slightly soft rear shock doesn’t have a negative effect on the CRF450RX’s excellent handling character. The CRF450RX’s all-new aluminum perimeter chassis features slightly different flex characteristics than the R’s chassis for off-road racing demands. This was accomplished by using RX-specific aluminum engine mounts that are shaped differently to achieve the desired flex, but otherwise the mainframes of the two are basically the same, with revised geometry and swaged spars that are claimed to reduce torsional stiffness by 6.8 percent while retaining the lateral stiffness of the previous-generation CRF450R chassis. The RX’s aluminum subframe utilizes a patent-pending extruded section where the seat mounts. The RX also features a 2.25-gallon plastic tank rather than the R’s 1.6-gallon titanium tank. The RX’s dual-muffler exhaust system helps to concentrate the bike’s overall mass by incorporating 78mm shorter mufflers. 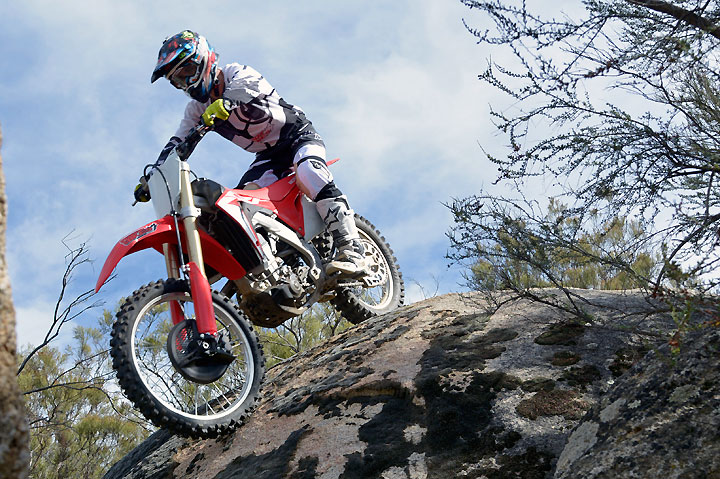 “The chassis is solid,” Abbatoye reported. “The high-speed stuff at Cahuilla maybe had you tapped out in third gear, but the bike is completely stable at that speed. It actually turns really well, a lot like the CRF450F even though the chassis flex is different. The conditions were almost too good to lose front-end traction on during our test day, but I get the sense that the front end would grip well in dry and loose terrain as well. It steers a little heavier than the 450R, but that’s barely noticeable.”

The RX’s 58.1-inch wheelbase is slightly shorter than the CRF450R’s 58.3-inch wheelbase. Front end rake is 27 degrees, 22 minutes, and the trail is set at 116mm. A new triple clamp offset features an offset of 22mm and eliminates the steering damper, although the mounting boss is still located on the triple clamp so that the Honda damper can be added as an accessory. Other dimensions include a 37.8-inch seat height and 12.9 inches of clearance between the ground and the CRF450RX’s heavy-duty plastic skid plate. Claimed weight is 261 lbs. compared to 243 lbs. for the CRF450R, but that’s easily understandable considering the RX’s electric starter, larger fuel tank and aforementioned skid plate.
A new cockpit layout was also part of the CRF450R/RX design, and Abbatoye said that Honda has hit upon an excellent ergonomic feel.

“Since I got to ride the R on the same day at Cahuilla Creek, I can say that the RX just feels like a great all-around bike for the motocross track or off-road. Compared the R, you do feel a little more weight due to the 2.25-gallon tank, but they did such a good job with it that it doesn’t get in the way. It is easy to get over the front of the bike to help you turn quicker. And, finally, I didn’t have an issue with RX’s radiator shrouds catching my boots when cornering!”

“The brakes work great,” he said. “I found myself running a little too fast into some downhill corners, but the brakes are smooth and powerful, and it was easy to catch back up and hit the line I wanted.” 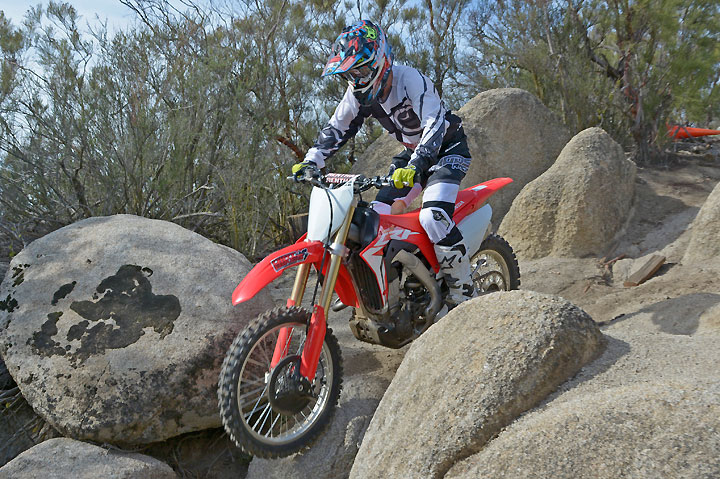 But perhaps his favorite part of the CRF450RX? The electric start.

“One thing that is really cool to me is how quick and easy the bike starts with the electric starter,” Abbatoye said. “It starts so much quicker than other electric-start bikes I’ve ridden. Honda needs to give up on this whole “option” thing with the CRF450R and just put it on there as well. It’s worth the extra weight for sure.”

Overall, the Honda CRF450RX does exactly what Honda intended it to do, capitalize on the all of the hard work put into the CRF450R to expand Honda’s off-road lineup and give it a new, high-profile machine to serve as the platform for its factory off-road racing effort with Johnny Campbell Racing as well as privateer racers who want to Ride Red in closed-course off-road competition.

“I’d love to race this bike,” Abbatoye said. “I felt comfortable instantly. Honda put some serious effort into the CRF450RX bike, and it shows.”

We may not have anticipated the Honda CRF450RX, but we’re sure glad Honda built it. 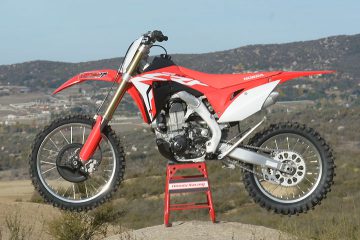